Warning: ...ah, hell, if you can't guess from the title, your time deserves to be wasted. 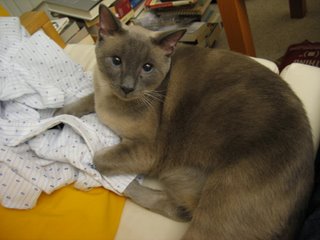 A nervous but resilient feline. The SF SPCA got him from San Francisco City Animal Care & Control; who knows where he was before that, although his behavior indicates that he once had an attentive human home. The SPCA's veterinary records state that upon arriving at the SPCA, he suffered from extreme fear-related anorexia, leading to liver disease, and he had to be placed on a feeding tube. A few weeks later he was up and about again, fully recovered. When I found him at Maddies Adoption Center a couple of months later, Manny climbed onto my lap.

Peace never lasts. My nefarious plan for feline adoption necessarily entailed having an SPCA volunteer pack his yowling, hissing, miserable ass into a cardboard box. Evidently not one to take mistreatment lying down, he clawed his way out of the box during the ride home. 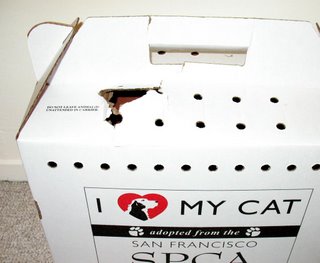 He spent the rest of the ride climbing around the car in panic, hyperventilating and hissing. At this point, Bay Area readers should imagine the drive from the Inner Mission to just north of Japantown, and the jostling it implies.

Cat adoption guidelines tell you to have a quiet, isolated room prepared with cat necessities. They're not kidding around. I set him down in the bathroom, and for the rest of the day he stayed there, retreating under the sink or behind the toilet whenever the door opened. My chief bonding tactic was to lie down on the bathroom floor and take naps. Sleep evidently rendered me sufficiently harmless that he was willing to come over and sniff at me periodically. (Maybe I should try this with women.)

Anyway, eliding some details, a dozen days later and he's out and about, accepting my food and affection. Unexpected noises or fast movements continue to make him flighty. Still, the mongrel cat has come home. 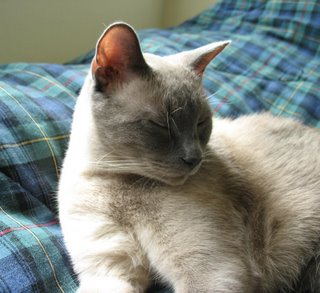