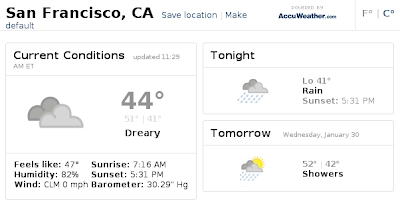 Whatever happened to "cloudy"? Just the facts please.

Posted by Keunwoo Lee (Cog) at 9:12 AM No comments:
Labels: bay-area, cnn, weather

There's just a ridiculous amount of frustratingly baseless analysis of this primary going on all over the place. I am spurred to weigh in.

Basically, as much as everyone's reading significance into primary results, I am inclined to say that the strongest signals point to no significant change from a month ago. We are exactly where we were; or at least, any signals indicating change are so weak that interpreting them is about as empirically sound as astrology.

The simplest explanation for the seemingly dramatic swing from Iowa to New Hampshire is just temporal and spatial noise: random week-to-week and population-to-population variation. Call me back when there's a more robust indication of a trend and maybe I'll get excited.

The chattering classes will chatter, as is their wont. But I find their diagnoses about as credible as the "financial analysts" who appear on business-oriented cable TV channels to state with a bogus air of authority that "tech stocks carried the markets higher today" or some such nonsense. It's random variation, that's all; or, at least, you have no evidence that it's not.

Posted by Keunwoo Lee (Cog) at 12:08 AM No comments:
Labels: elections, politics

Belatedly, I hereby link to this strip and declare it awesome.

Roomba, Cat, Human: A comparative analysis of my apartment's economy