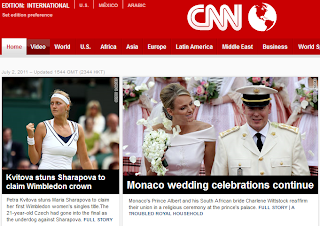 One woman is the subject of the photo, and you see her eyes looking fearlessly at her vanquished opponent. Furthermore, she is important for having excelled in a worldwide competition of objective achievement. The other is a secondary subject, her eyes invisible but her gaze clearly directed at the primary subject of the photo, a man — whom, I suppose, she has also conquered, in a sense, although her fellow competitors for the prize are (as in the first photo) outside the frame. Furthermore she is newsworthy only because her new husband happens to be of royal birth. Wittstock is of course more conventionally beautiful than Kvitova as well.

I won't claim that sports are categorically more important than weddings of ceremonial heads of state, but someday I'd hope that the positions of these images would be reversed.

(Posted from lounge in BGI airport while waiting for a flight.)