The evolution of players in the American constitutional game

Another looming threat of Federal government shutdown prompts Timothy B. Lee to concur with the Yglesian view that American constitutional democracy is doomed — or, at least, in need of major structural changes:

The hour-by-hour style of conventional news coverage tends to obscure the big picture: the perpetual crises the US government has suffered over the last decade are a symptom of America’s deeply flawed constitutional system. This isn’t a new insight on my part. You can read Matt Yglesias’s classic 2015 write-up of the argument, which in turn draws on a large body of political science literature.

The basic issue is that the American system of checks and balances was designed for a nation without ideologically polarized parties. . . . The problem is compounded by the fact that it’s so hard to remove a bad president from office.

One seemingly-strong rebuttal to these arguments is that American democracy has survived for a long time, so probably the system is fine. The last Civil War veterans died in the 1950s; unlike most nations on Earth, America has no living citizens with a firsthand memory of existential risk to its constitution. This history of recent stability is probably the main reason that most Americans instinctively reject arguments, no matter how logically sound, that America's constitutional system is fundamentally flawed.

But this rebuttal has less force than it seems. The American constitution is a game, and political actors are players. When people play a game, it takes time to explore the available strategies. Partly this is because, even for relatively simple games, the space of strategies can be immense, requiring time to explore; partly this is because external forces, such as social norms, may prevent players from using optimal strategies initially. However, once a stronger strategy is discovered, it is difficult to stuff the genie back into the bottle; rewards accumulate for those who ruthlessly exploit the most lucrative methods of play, and those who use less optimal strategies are driven out.

A nice illustration of this dynamic can be seen in Google's training of its chess-playing program AlphaZero chess — openings such as the French Defense and Caro-Kann Defense appeared strong to the program while it was training itself, but eventually it abandons these almost entirely in favor of strategies that are inherently stronger, such as the English Opening. 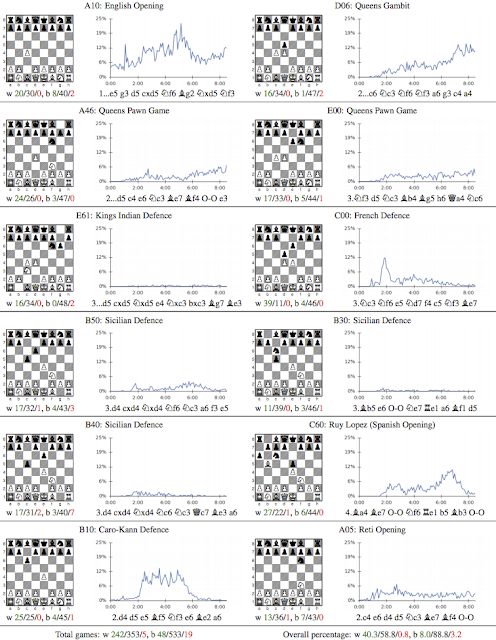 In other words, every nontrivial game is also an optimization process, where the set of players explores the landscape of available strategies over time. In such a process, it is entirely possible for the most prevalent strategies to shift dramatically and even discontinuously; the past is not necessarily a guide to the future.

If you had been taught to play chess by the version of AlphaZero that existed two hours into its training, you might have learned that the French Defense was the "normal" way to win at chess; if I showed you a single later game using the Queens Gambit, you might view that as a temporary aberration. You would be wrong. Likewise, if you came of age in the 20th century, you might view electoral politics as practiced back then as "normal", and the current era, where the government walks up to the brink of shutdown or debt ceiling default every year or two, as a temporary aberration. I suppose it's possible, but the persistence of this observed behavior suggests that it is simply a stronger way for political parties to play the game.

Lee and Yglesias, and the political scientists whose work they draw upon, point to increasing partisan polarization as the cause of the shift in American electoral politics in recent decades. This is fine as far as it goes, but it is important also to realize that the constitutional game itself has always had, encoded within its rules, the possibility of the current configuration of power. The numerous veto points of the American system have always had the potential to be used to hold one policy objective or another hostage. The division of electoral authority between the President and Congress has always had the potential to allow both to dodge accountability for outcomes. It has always been possible for ideologically united parties to gridlock against each other. Accidental features of the American political landscape prevented these strategies from being exploited, but now the players are playing at this level, and thereby evidently beating those who would play differently. There are now only two possible avenues to change: either some novel strategy emerges to beat these strategies, or the rules must be revised.

Incidentally, this general idea — that a ruleset and the actors who interact with it coevolve — recurs across many fields:

You'll find many other places to apply this concept once you have it in your toolkit.

(I've actually been meaning to write a longer essay on this idea and its implications for a while now, but haven't done so for the usual reasons, so this post will have to do for now. Well, this, and my Pinboard tag on the subject)