Urban pranksterism you can believe in

By way of explaining my previous post to people not resident in the Bay Area, LaughingSquid brings us a video and press release allegedly from those responsible. If you prefer the work of Real Journalists then you may also peruse this Google News cluster, of which the SFGate blog is probably the best representative.

Incidentally, I'd bet good money that there will someday be an officially recognized Barack Obama St. in San Francisco.

Limits to trust in the executive

W. Wilkinson points to some mostly good things Obama's done so far* to limit executive power. And, on the one hand, provided he sticks by these commitments, that's great for the next 4 or 8 years.

But on the other hand, the very fact that a President can change these norms simply by issuing an executive order is deeply disturbing. The next President can override these orders with different ones. This can be read as evidence that elections matter — contra the Greens and assorted other cynics who say there's no meaningful difference between the candidates of the two parties — but elections shouldn't matter in this particular way. It just shouldn't be possible for the President to run the executive in a way that's completely unanswerable to the public's questioning, to say nothing of the law.

You can't hand the fox the keys to the henhouse and then simply trust in the fox's integrity. Even if you manage to find the one vegetarian fox in the world, you would not call "finding vegetarian foxes" a long-term strategy for henhouse protection.

Which is why Congress has to play a vigorous role in limiting executive power. Which, in turn, is why it was so shameful for Obama to capitulate on giving Verizon and AT&T immunity for their FISA lawbreaking, and why it's so necessary for Pelosi and Reid to open vigorous investigations into the Bush administration's past behavior.

Sadly, I don't think the Democrats are up to it. It's still early days for the newly elected Congress, but I suspect that ongoing crises of various kinds will serve as ample excuse not to pursue "divisive" investigations.

*Although I don't see the point of freezing the salaries of top White House aides, except as a temporary and symbolic gesture. In a multi-trillion dollar Federal government budget, saving a few millions of dollars in salaries at the top, and thereby risking not attracting the best of the best, is penny wise and pound foolish. Certain super-high-prestige positions will attract top caliber people simply by virtue of the job title. But as you go further down the ladder, you get positions where the title's less impressive, but it's still important to attract people whose other options would include high-paying and high-prestige positions in the private sector. It's all fine and well to say that public servants should be public-spirited, but when choosing their careers, real people balance financial compensation, personal satisfaction, and the public interest. For some skill sets, private-sector work pays more than public-sector work and simultaneously offers less frustration, more autonomy, and still some sense of serving the public interest (albeit via market mechanisms). Do you want to lose people with those skill sets? What marginal reduction in the efficiency of the executive branch will you accept in order to maintain the fiction that White House employees are motivated by public-spiritedness and nothing else? If you'll accept 0.1%, then you've just wasted a couple billion dollars. An expensive fiction. 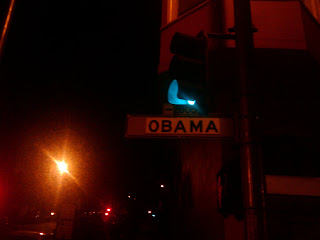 Apologies for the low light; it was an early morning today.

Posted by Keunwoo Lee (Cog) at 7:58 AM No comments:
Labels: barack-obama, san-francisco

I've been intermittently sick the past few weeks. Partly as a consequence, I've been spending an unusual amount of time sitting around watching videos, including some that I've seen before. I'll try to extract some value from this lost time by passing on some brief remarks:

Casino Royale
Surprisingly good. Tightly constructed and executed with grace and wit. Additionally, the action is shot with uncommon telegraphic clarity for a modern action movie: if you pay close attention, you will understand where everybody's body is at all times. I received other people's positive reviews with skepticism, but that skepticism was overcome. Note that I don't like other James Bond movies.
Tian Mi Mi (a.k.a. Comrades: Almost a Love Story)
My quest to watch every Maggie Cheung film continues. This film is, also, surprisingly good, and I plan to write a lengthier post on it Real Soon Now. English subtitled videos of this film are difficult to obtain, but if you can get your hands on it, you should give it a watch.
Duo Luo Tian Shi (a.k.a. Fallen Angels)
Still one of my favorite films ever. I actually like it better than Chungking Express or In the Mood For Love, Wong's two best-known-stateside films. The memory of this film's visual potency is pretty much indelible, but I had forgotten how kinky and how silly this movie is. And the final shot still slays me; it may be one of the most miraculous moments in all of cinema.
The Lady Eve
Vastly overrated. It's watchable enough to hold your attention for 90-odd minutes, but it's neither especially funny nor especially romantic. It also has not aged well; to take one random example, Pike's reaction to Eve's "confession" of her non-virginhood just doesn't resonate anymore, and without this tension there is simply no potential energy to be released by laughter. On the other hand, Barbara Stanwyck does have nice legs.
Friday Night Lights (first season & half of second season)
Not the sort of show I usually watch, but I put this on my Netflix streaming queue based on recommendations from various quarters (e.g. Yglesias). And it's not bad, at first. Small-town life is sufficiently foreign to me that there's a voyeuristic, almost anthropological charm to watching this carefully textured depiction of it. On reflection, however, every other virtue seems balanced by a significant flaw: the sports scenes are well-executed, but highly predictable; the actors' body language and line delivery are uncommonly naturalistic for television, but the dialogue itself is frequently preachy or contrived; the characters and their interpersonal relationships are layered and well-drawn, but the writers cannot resist the temptation to tie up most conflicts with a neat bow within 1 to 3 episodes. Given this mixed bag of fundamentals, much hangs on the execution of particular episodes or character arcs. On balance, I found the first season enjoyable enough to bear its flaws; by contrast, the second season goes precipitously downhill in many ways, and I've mostly been playing it in the background while I putter around on my laptop.
Batman Begins
Significantly worse than my memory from seeing it in the theater. The movie comes apart badly after Wayne returns to Gotham. The League of Shadows plot feels wildly implausible*, and the stagey "urban chaos" scenes in the Narrows feel too theatrical and insufficiently cinematic. Also, the writing throughout leans too heavily on awkward verbatim callbacks (repetitions of lines said earlier in the movie). On the other hand, Katie Holmes is nowhere near as bad as is popularly remembered; the problem is that she's turning in a merely adequate performance in a movie populated by Christian Bale and Gary Oldman. (*Of course, all comic book movie plots are implausible in some sense, but what I'm saying is that it feels implausible — that is, it strikes a tonally false note, and I'm not sure exactly why. Maybe it's because I'll suspend disbelief for a hokey magical ninja cult boasting (perhaps falsely) about thousand-year-old conspiracies in the alternate-universe Tibetan mountains, but I can't do the same in the context of Manhattan/Chicago Gotham.)
The Dark Knight
Better than my memory from seeing it in the theater. I recall thinking that the Two-Face transformation seemed abrupt and ridiculous, but on rewatching, it holds together somewhat better. Dent's vigilantism begins with straightforward acts of revenge, which seems psychologically plausible, and proceeds to total derangement only by degrees. It's not completely successful, but it doesn't ruin the movie. (However, the coin gimmick remains silly.) In retrospect, Heath Ledger's performance has been overpraised, but it is compelling; listen to how he uses his voice. Finally, the action set pieces remain spectacular.