So, this morning, the U.S. Postal Service knocked on my apartment door and left a package from Kiki's. 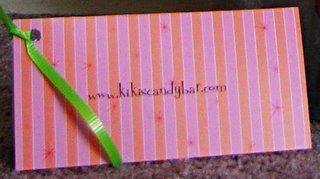 The card revealed that the basket came courtesy of the company that offered me a job recently. The strange thing is, I didn't remember giving this company my home address. Hmmm. 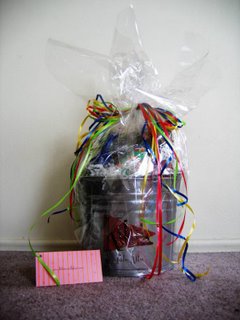 I subsequently emailed the recruiter, thanking her for the basket, and alluding to my confusion, whereupon she explained that my home address was on the physical, pen-and-paper employment application I'd filled out during my face-to-face interview. The story suddenly became much less funny/cool/sinister than it would have been, particularly given the company concerned. Oh well.

Being the export of a hip Bay Area confectioner, the candy basket contains, of course, not only the standard-issue Raisinets, Smarties, etc., and not only a company-logo moon pie and T-shirt, but also some items that allude to the social practices of the local fauna. 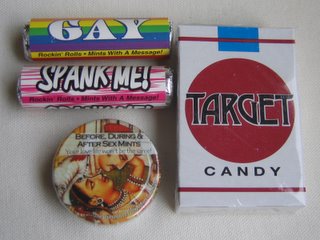 Plus candy cigarettes, which I have not seen since I was about 12 years old. These remind me of the fact that my interview hotel offered a yo-yo, Slinky, etc. inside a little "kiddie-toy minibar" in the desk. All part of the careful cultivation of juvenile play behavior endemic to Bay Area geekdom. I could, at this point, work up some kind of cultural commentary on the relationship between play, creativity, immaturity, and geek culture, but Douglas Coupland already did that about a decade ago.

Posted by Keunwoo Lee (Cog) at 11:53 AM No comments:
Labels: bay-area, candy, job-search

Warning: navel-gazing metablogging ahead. Skip if you value your time.

Grrlscientist has suggested that I participate in a meme wherein one finds the 23rd post on one's blog and posts the 5th sentence. Although I am not a huge fan of blog-memes in general, I'm game for this one, mostly because it provides an excuse to clear out some other metablogging that's been sitting in my drafts for some time. So, to wit... 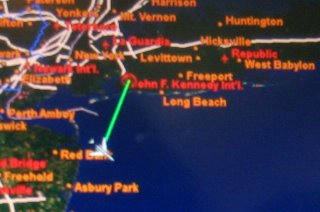 So, I'm back from my first academic interview. Oddly enough, I had a great time. People tell me that this level of enjoyment fades after you've been to a dozen. Fortunately or unfortunately, I probably won't have that problem, because I probably won't have a dozen in-person interviews. I will also say that having a nice industry job offer in your back pocket makes these things much less stressful.

Which is all in the way of remarking that I saw Jorge Cham speak, not long ago, as part of his lecture tour on the travails of being a fledgling academic. 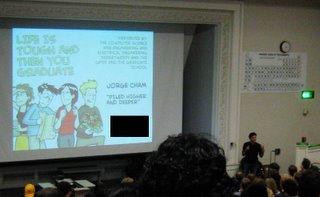 Jorge Cham --- or at least the lecture persona known as Jorge Cham --- is a brilliantly funny, smart, and compassionate guy, and I don't doubt that his strip and lecture tour are doing worlds of good for struggling grad students all over the country.

On the other hand, as a computer science grad student, I couldn't help but think: could it be possible that a grad student at Stanford computer science really had it that bad? In particular, Jorge's statements about the economic insecurity of grad students struck me as strange. Computer science is one of the few branches of academia for which the implicit bargain --- sacrifice now, and you'll get a good job later --- still holds. Now, that job may not be an academic job, but if you go to a good grad school in computer science and cannot land an academic job of some sort, then chances are that you weren't cut out for academia anyway.

Jorge --- like, for that matter, Cecilia and Nameless and Mike Slackenerny --- could get a very well-paying job in industry, at almost any time of his choosing, simply by walking away from the academic game. And this economic reality has consequences throughout the grad student experience --- at "good" schools (which certainly includes Stanford), we get paid a livable wage, and we're largely given the infrastructure we need to be productive, and we get decent support in our job search. Because we can walk away.

I understand that Jorge's speaking, in some sense, for all grad students, not just computer scientists. And I also understand that grad school poses emotional challenges that all the economic security in the world wouldn't fix. However, if I were in Jorge's place, I'd have confessed, in my lectures, that my deal was much sweeter than the average grad student's. I mean, I'd be slightly uneasy, coming from my current situation, laying claim to the full measure of grad student hardship. 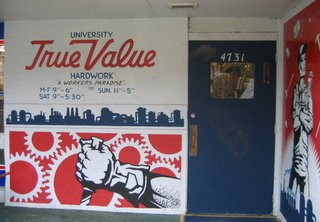 Posted by Keunwoo Lee (Cog) at 12:09 AM No comments:
Labels: advertising, communism, constructivism

Lectures on "aggressive policies" for detention and interrogation

I've linked previously to a bunch of lectures from the Cybersecurity and Homeland Security course I attended last quarter, but I haven't yet linked to a couple of the most important and disturbing. On November 30, the course organizers persuaded speakers from the U.S. Dept. of Defense to speak. The two principal lecturers were an historian in the employ of the Pentagon and a U.S. Army interrogator respectively.

Lecture links (as usual, you'll want WebViewer for an optimal experience, but you can also page through the slides manually):

By and large, the first lecture's infuriating, and the second lecture's chilling and surreal, a quality that is not mitigated by the fact that Ms. Sheaks, the United States Army field interrogator, is a soft-spoken woman wearing a low-cut dress.

I don't have a whole lot more to say --- the lectures almost speak for themselves --- except that it's worth noting how careful the speakers are to emphasize that they're speaking for the Department of Defense only, and (in Ms. Sheaks's case) addressing interrogation policy only. This leaves two elephants in the room. First, most of the recent "aggressive interrogation" incidents were allegedly performed by the CIA, which isn't part of the DoD. Second, the abuses at Abu Ghraib were not, in fact, performed as part of interrogation procedures --- they were performed, as far as we can tell, for no purpose at all.

(Warning: Navel-gazing ahead. I'm sitting home sick on a Friday night, and so I blog. Pity me, world!)

Next, here are some pictures from my holiday trips into NYC, the city where my heart is buried. I played the tourist through and through, because I realized recently that I didn't have any of my own (copyright-unencumbered) images of most NYC sights. Most of these should be readily identifiable... 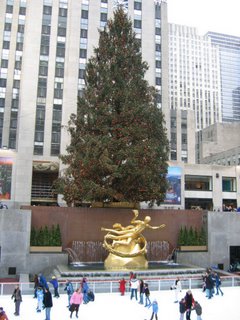 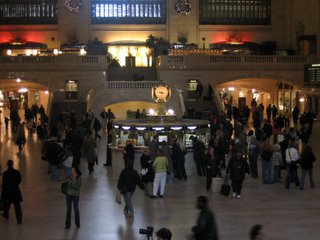 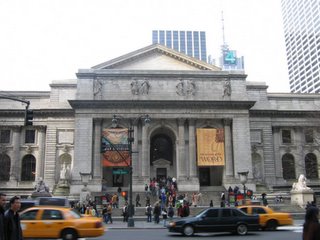 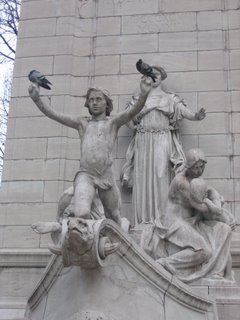 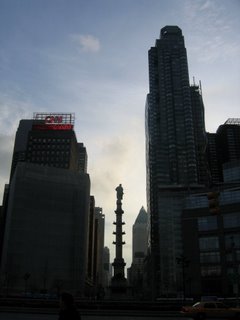 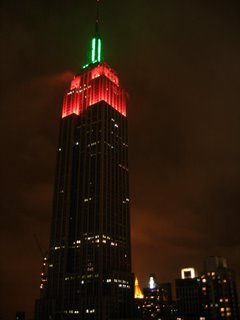 Lastly, my first-ever Friday cat blogging, wherein I commandeer the cats of my NYC friends PM and JW: 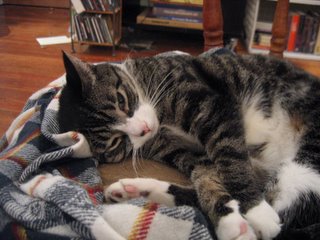 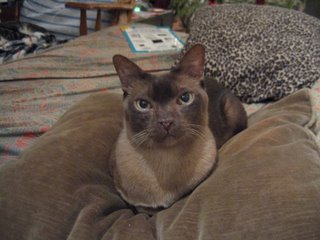 Attention KOrganizer users: Please be warned that if you set your "hour size" in the view configuration small enough (for me, 8 or fewer pixels, but this varies depending on your screen resolution) then the labels on your hours grid will not display accurately: 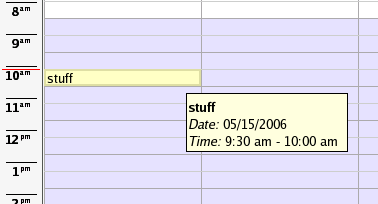 As you can see, the appointment's set for 9:30, but from the label it appears to be 10:00. What's the cause of this bug? Well, here's the bottom of the grid, which may give you a hint: 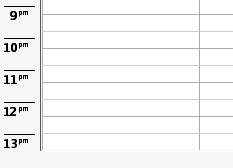 Wow. The programmers never tested what happens when the user sets the grid size small enough so that more than 24 hours fit onto the screen. I like to have a view of all 24 hours of the day in my planner (it helps to track late-night or early-morning flights and submission deadlines), so I've had it configured this way for a long time. Older versions of KOrganizer worked fine --- it would intelligently detect when the grid was too small, and adjust the size so that it just filled the screen --- but code for labeling the grid was tweaked in 3.5, and I guess this got broken.

I actually missed a job interview call because of this bug, and of course I am pissed, mostly at myself for relying on software too much, but also slightly at the programmers. I can't be too pissed, because they wrote a very useful piece of software that's free, and that I use all the time. Nevertheless, it seems like this sort of thing simply should not happen. The very first thing I'd do, after writing code like this, is to test the boundary conditions: what happens when you set the pixel height to a tiny value? A large value? This sort of thing should be almost reflexive.