How Commoners can beat the Mafia (most of the time)

For those who have never played the party game Mafia, here are the rules:

In practice, the Mafia wins as soon as they're a majority, because then they can always outvote the Commoners and execute them all.

What makes this game fun is the social interaction and politicking that goes on when you're deciding whom to execute. The Mafiosi are all trying to influence the voting so that a Commoner gets executed on each round. Meanwhile, the Commoners are trying to detect excessive certainty or bloodlust (which probably indicates a Mafioso --- after all, only Mafia know for certain whom they want executed), so the Mafia can't appear too eager or obvious. It's also a game of teamwork --- a lone clever Commoner can't beat the Mafia unless (s)he can also convince the other suspicious townspeople to trust him/her. A cleverly played game of Mafia will ultimately be won by the Mafia, if they're better actors, or by the Commoners, if they're better at "reading" people. With the right group, this can be lots of fun.

Now I'm going to tell you how to take all the fun out of Mafia. Propose the following strategy to your fellow townspeople:

Proving this claim formally requires some fairly intense math. I looked at it for a few minutes with one of my friends (who was also a computer scientist). We decided it was hard, and just handwaved our way through it.

(If you're curious, here's the handwaving: on average, over all random sortings, you expect the proportion of Mafia and Commoners in the remaining population to remain roughly constant as the population decreases; so the Mafia will usually not attain a majority. Then, once you get down to a small number of remaining players --- say, N, where 1/N is the fraction of Mafiosi in the original population --- then you expect that, on average, there will be 1 Mafioso left out of those N players. The chance that this Mafioso will be the last one standing is 1/N. Since N > 2, the last Mafioso probably doesn't survive.)

So, on average, over a large number of games, this is a winning strategy for the Commoners. Only Mafiosi would dissent from it; but the really cool thing is that they can't do anything about it, because if they dissent then they reveal that they belong to the Mafia. Even if all of them dissent together, they're outnumbered, so the Commoners will just execute them all. And even if the Mafia win --- as they sometimes will --- the win doesn't give them much satisfaction, since it wasn't through the exercise of wit and deception but just a random roll of the dice.

When you play the game by this strategy --- and I have done it once --- the game goes pretty fast. Everyone votes unanimously to execute the next player on the list. There's no discussion, no politicking, no doubt, and the game becomes a rather grimly fatalistic exercise until the arbiter calls the end. On the other hand, as the person who devised this strategy, I enjoyed watching it play out.

The Commoners won, by the way. Ironically, I was on the Mafia team that time.

UPDATE 9:30 p.m.: I got curious, so I wrote a Python script to simulate many games of Mafia in aggregate. Basically, the handwaving analysis above is a decent approximation of the actual results for typical party-sized populations (6-30 people) and small fractions of Mafia. At a population of 25% Mafia, the Mafia wins about 25% of the time. As the number of Mafia increases, however, the results begin to diverge from this analysis, due to the asymmetry in winning conditions: the Mafia win at a rate that exceeds their fraction of the population. At about 39% Mafia, the game becomes 50/50 Commoners v. Mafia.

The source for the script follows. It's a pretty direct interpretation; I haven't tried to do any of the obvious optimizations for simulating games.

UPDATE 1 Sept: In comments, Andrew and AJ reminded me of a variation of the rules, wherein the Mafia get to secretly "hit" one Commoner in each round, after execution. I've fixed the script so that the HIT_VARIANT flag controls whether to play with this variation. The results are surprising --- see comments for details...

Digby points to one of Rose Aguillar's interviews with Oklahomans. Read the Mary Fowler interview and weep. It may have seemed that I was exaggerating when I wrote about how stupid and blind conservative thinking is; but if anything, I was understating the truth. It is as if some alien creature has eaten Fowler's brain and implanted a little alien worm in her skull to replace it.

Just got back from a Bay Area trip, visiting my friend MS et al. While I was down there, we visited the world-famous Monterey Bay Aquarium, where, among other things, I found many reasons to play around with the movie recorder on my new digital camera. The results were impressive --- considering it's a camera and not a camcorder, the Canon PowerShot A95 takes really nice-looking videos at 640x480 --- but the ambient sound inside the aquarium was just crowd noise: murmuring strangers, screaming kids, and such. Sort of ruins the mood when you're looking at a video that looks like this: 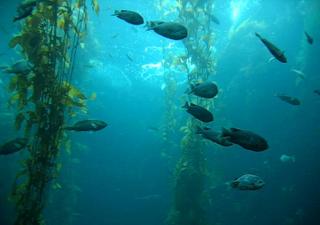 The PowerShot A95 doesn't have a way to turn off the sound during video recording either. So, I wanted to strip the sound off my video files, without re-encoding the video (which would reduce the image quality).

"Surely," I thought, "this will be easy. The AVI file format stores audio in separate binary chunks from the video --- it's just a matter of erasing the audio chunks. Even if the software that comes with my camera can't do it, there will be multiple freeware utilities that can. Maybe not for Linux, but surely for Windows..."

Anyway, to make a long story short, I couldn't find a good free utility to do this under Windows. I found many programs that let me replace the soundtrack to a movie, but for some reason none of them could remove the sound altogether. I didn't feel like dropping a few hundred bucks on Adobe Premiere either. So, the best option turned out to be --- surprise! --- a Unix utility called transcode. I got mine via the freshrpms yum repository for Fedora Core 4, read the manual pages and the wiki, and came up with the following recipe:

Here's a Python script that makes transcode batch processing easy; just give it a list of filenames of the format foobar.avi, and it will produce a list of silent video files named foobar_nosound.avi: