How destructive was Ozymandias's bomb in Watchmen (the movie)?

Attention conservation notice: nitpicky analysis of a detail that you probably don't care about, from some comic book movie.

Finally saw Watchmen on video (missed it in theaters). I noticed something curious about the final explosion. It is clearly centered on Times Square, and produces a perfectly spherical blast; but in a later shot, the Empire State Building is not only standing but largely intact. 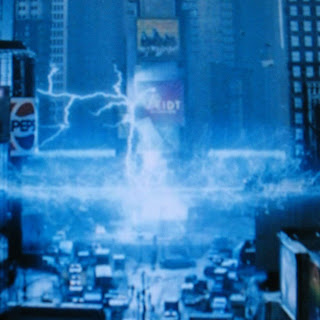 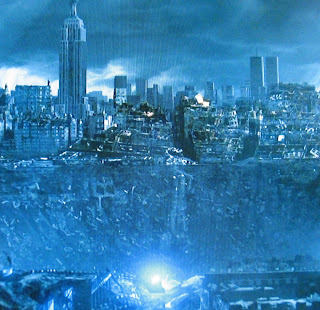 From this, we can infer that the explosion's radius of destruction was less than a dozen or so north/south blocks.

This got me thinking: how big is this explosion, compared to an actual nuclear bomb blast?

According to HYDESim, a 25-kiloton nuclear weapon detonated at Times Square would exert just enough overpressure at the Empire State Building site to demolish a concrete skyscraper. For comparison, according to the the carloslabs.com Ground Zero simulator, the "Little Boy" nuclear weapon detonated over Hiroshima sixty-four years ago was 15 kilotons; if detonated over Times Square, it would have blown the windows out of the Empire State Building, but the structure would probably not be knocked down. 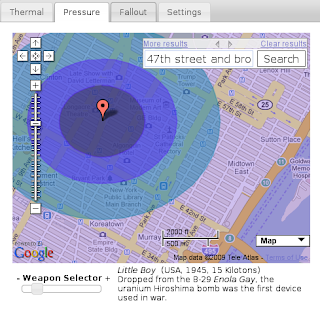 So Ozymandias's bombs appear to create a pressure blast about as powerful as that from the atomic bombs dropped on Japan in World War II.

The nuclear weapons possessed by the U.S. and U.S.S.R. in the 1980's were, of course, vastly more destructive, on the order of hundreds of kilotons; and would have been delivered as batches of multiple simultaneous warheads. 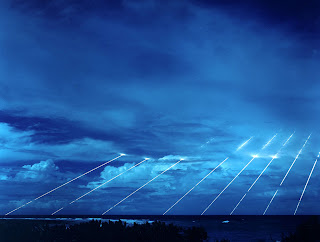 Now, regarding Ozymandias's bombs, it's possible that radiation killed many people outside the direct blast radius. But there's no indication in the movie that Dr. Manhattan's electromagnetic emissions are harmful to human life. In my opinion, if one takes the movie strictly on its own terms, Ozymandias has been careful to engineer a relatively small mass-destruction event: only on the scale of a small fission bomb.

Of course, step outside of the movie's fiction, and it seems equally likely that director Zach Snyder simply assumed that most viewers would not be too familiar with the geography of New York. So he had Ozymandias set off the bomb in Times Square, because it's instantly recognizable, and then he left the Empire State Building standing so that viewers would recognize it instantly in the aftermath shot.