Full disclosure: I might end up working for Google at some date in the future. I believe that this didn't much affect my conclusions in what follows, but you should judge for yourself.

I'm somewhat late to the party on this, but there's been a lot of outrage lately at Google's decision to submit to state censorship of its search results in China.

Notice my phrasing: Google's submission to state censorship by the Chinese government. I don't mean, by this construction, to absolve Google of blame, but I think Google's critics haven't been clear enough about what they are requesting.

Most of Google's critics have not stated which door they prefer, but I take it that a lot of them would prefer to see what's behind door number three. Google would thereby call China out, leading to a political confrontation. Would China take the international PR hit that would come from shutting down Google China? I don't know for certain, but I suspect they would. In the grand scheme of things, Google's not a big deal for an entity like the Chinese government.

I could then imagine some grand and surreal pageant wherein Larry or Sergey flies incognito to China, equipped with a laptop and a stack of Linux boot CDs, and ducks into a shady cybercafe. The Google founder, brandishing a fistful of thousand-dollar bills, convinces the cafe owner to shoo all the other patrons out. He then reboots all the cafe's machines, loading them up with proxies that tunnel surreptitiously back to Google HQ in Mountain View. He tells the owner to get out of town forever before the secret police come, for he is deputizing the cafe into an impromptu replacement for Google.cn. It is an absurd and symbolic gesture only: a couple dozen cybercafe machines cannot possibly serve the load for Google.cn; the response is sluggish to nonexistent; but for an hour, a day, Google.cn lives! And when the secret police come, these machines broadcast to the world, via live webcam, the stuttering, half-a-frame-per-second, pixelated video of the Google founder, being led away in handcuffs, and --- the compression artifacts make it hard to see, but --- is that a hood over his head? The repercussions of this quintessentially twenty-first century event resonate for decades to come, for this is just the beginning...

Well. The vision dims, the lights go out, the door shuts. I step backwards into reality.

Door number three is by far the most interesting door. It's the door that would open in a Bruce Sterling novel. However, reality is not, despite some indications, actually a Bruce Sterling novel. The tale I've just spun is entertaining partly because it is so unlikely. I may wish, on some level, that Google had decided to be heroes, but mostly in the same way that I wish all people were heroic more often --- which is to say, I wish it without any strong expectation that that the wish will be fulfilled. And, of course, sitting safely behind my laptop in a country where, for the moment at least, I am in no danger of being jailed merely for posting something on the Internet that offends the government, I would certainly enjoy the spectacle of Google taking on China. Still, my wish to be inspired and entertained collides with my realism, and I am unsurprised that these things do not come to pass.

So what, then, of "Don't be evil"? I think the astonishing fact that people swallowed this bromide testifies to how devoutly they wish that capitalism possessed more benevolence and less efficiency than it actually possesses. Post-millennial Americans, especially, crave heroes while simultaneously being so wedded to capitalism that they cannot accept that capitalism alone cannot produce certain kinds of heroism. The two virtues of capitalist heroism, insofar as capitalism specifically engenders any heroic virtues at all, are (1) cleverness and (2) the relentlessly single-minded pursuit of the satisfaction of a market demand. Alas, the English language has no stirring and pithy name for the latter virtue, but I do believe it can be a stirring sight, in the right circumstances.

Nevertheless, it is emphatically not capitalism, but something else, that breeds the reckless altruism required, for example, to stand alone before a column of tanks armed with nothing but a briefcase and one's sense of human dignity.

Now, of course, human beings living under capitalism do possess qualities beyond those of capitalism itself --- contra Marx, economics is only one of many interlocking systems which, in combination, knit our characters together. But businesses, although composed of human beings, are not human beings. A business is a social organism with a particular mission which is, barring exceptional circumstances, neither explicitly political nor altruistic. This doesn't absolve the individual human beings who run the business of their moral culpability, but it does tell us how to calibrate our expectations of businesses in general.

If we want to alter the course of politics in China --- or, for that matter, anywhere else --- then we should look primarily to governments and other political organizations, not businesses.

So much for door number three. Let's have a look behind door number two. What if Google were simply to cede the Chinese search engine market to its competitors?

We can answer that question by looking at the behavior of Google's most credible competitors, Microsoft and Yahoo. Consider the much-invoked comparison, probably first suggested by Sid Karin on the interesting-people mailing list, of image searches for "tiananmen" on both Google.com and Google.cn. Here's "tiananmen" on Google.com (i.e., Google USA) as of 10 Feb 2006: 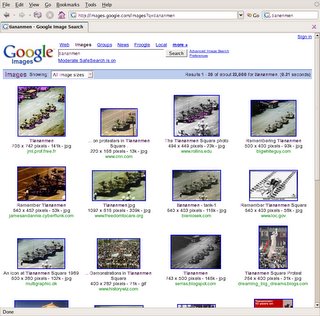 And here's "tiananmen" on Google.cn on the same day: 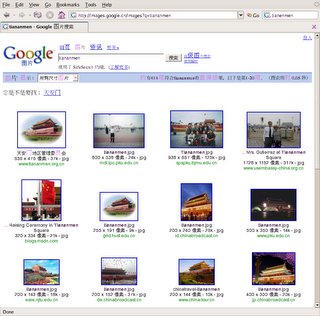 Well, it's pretty damning. So, suppose Google pulls out of China. Microsoft and Yahoo, you can have this market. What does that future look like? Microsoft hasn't launched its image search in China, but conveniently Yahoo has. Here's "tiananmen" on Yahoo USA's image search the same day: 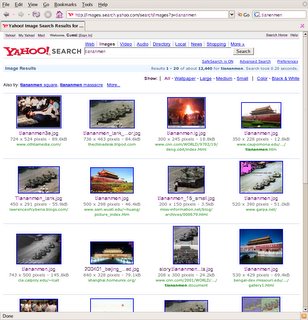 And here's "tiananmen" on Yahoo China: 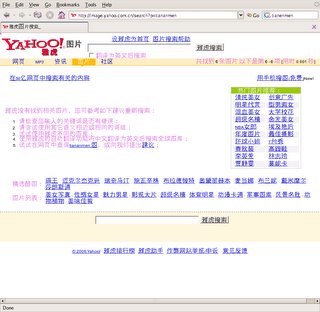 I can't read Chinese, so I can't tell if Yahoo's message actually informs the user that the search result has been censored, or opts for the more Orwellian claim that no images match that search term. However, it seems clear that Yahoo's doing no better than Google here. Where are the hundreds of headlines, and the massive outcry among the chattering classes, about Yahoo's censorship? Where are the calls to boycott Yahoo, the satirical cartoons, the bitter debates on online forums?

One might argue that Yahoo never claimed to do no evil. Well, OK, but I don't believe that such an omission really absolves them of guilt. And this answer doesn't address the uncomfortable fact that removing Google from China doesn't actually improve the lot of Chinese Internet users, who will simply be forced to use some other search engine that's also censored, and perhaps more severely.

A better answer, then: the fact that somebody else will perform some evil is no excuse for becoming implicated in that evil oneself. So, only evil companies may operate in China; let China be served by evil companies, and let us keep our hands clean.

This idea has some emotional appeal, and even some merit, but one must choose carefully where and when to apply it.

Some cases are clear. Should one provide census machines to the government of Nazi Germany, as IBM's German subsidiary did in World War II? Of course not, at least not knowing what we know today: no conceivable use of these machines could accomplish anything but evil. No matter that somebody else might build similar machines. Let the blood be on their hands.

As evidence for this, observe that the vast majority of American Google users search with the SafeSearch censorship feature enabled. This censorship can be turned off, but my point is that people find even the censored product non-evil enough that they still use it, and most cannot be bothered to turn it off. I, for one, use Google constantly, and it seems ridiculous to believe that depriving Chinese users of a similar (albeit more heavily censored) service would somehow advance the cause of freedom.

Furthermore, the presence of more search engines in China seems like a positive good in itself. First, more search engines means more labor for the censors, which makes censorship more costly, which means that there will be quantitatively less censorship, or at least less comprehensive enforcement of censorship, than there would be otherwise. Second, for the foreseeable future, Internet filtering technology will always be imperfect. Multiple engines, with their different underlying algorithms, will inevitably censor things in subtly different ways, and so having more engines increases the likelihood that any given piece of information will leak through at least one of their sieves. Therefore, the Chinese government is fighting a losing battle, and the presence of more search engines may, in some small way, accelerate the day that the censors admit defeat.

I am not naïve enough to believe that these considerations were the only ones spoken of when Google's executives were mulling over the decision to comply with the Chinese government's demands. In fact, I don't believe that they even seriously considered the option of pulling out of China completely. But the bottom line is that, upon reflection, I can't say with any certainty that Google should have pulled out of China.

In walking through this door, Google still commits itself to a series of gambles. Google's betting that its brand will survive the negative PR from collaborating with the Chinese government. It's also betting that the Chinese government will be placated by relatively modest concessions, and will not demand deeper, more cutting compromises that, whether acceded to or refused, would diminish the payoff from its current bet. If, for example, the Chinese government demands all of Google China's search logs, then Google will face these three doors again, only the stakes will be even higher and the likely price even steeper. Will Beijing come to collect this pound of flesh someday? I really don't know.

In the meantime, Google's critics will continue to blame them for failing to come up with a neat and tidy solution to an ultimately intractable problem. Without outrage, nothing ever gets accomplished, so I can't exactly blame those who are outraged, but nor can I agree with them. There are some merits to Google's argument in defense of its decision, just as there are merits to the argument that they should act differently. In the end, this issue won't have a clean resolution as long as China remains unfree.